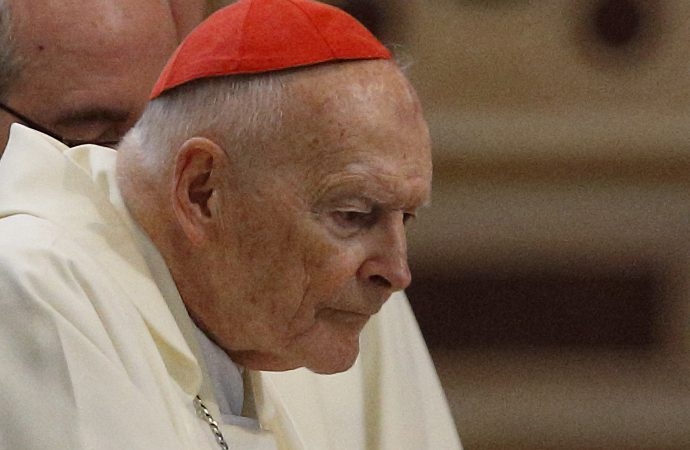 Then-Cardinal Theodore E. McCarrick attends a Mass in Rome April 13, 2018. On July 28 Pope Francis accepted the resignation of Cardinal McCormick from the College of Cardinals after allegations surfaced that he had sexually abused minors as well as adult seminarians.

NEW YORK - Six months after the scandal surrounding former Cardinal Theodore McCarrick first came to light - wherein accusations of sexual abuse from a former altar boy prompted subsequent revelations of abuse and misconduct - Crux has learned that the Vatican is now investigating a total of three cases of abuse against the former archbishop of Washington, one of which has yet to be publicly reported.

In June 2018, the Archdiocese of New York announced that a review board had substantiated claims of abuse against McCarrick by a former altar boy at Saint Patrick’s who reported two incidents of abuse dating back to 1971 and 1972.
In response, the Vatican suspended McCarrick from public ministry pending an investigation by the Holy See.
The following month, the New York Times first reported the case of James Grein, the child of close family friends of McCarrick, who alleged the then-priest commenced years of abuse against him beginning in the 1970s when he was 11 years old.

Since then, multiple accusations of abuse and misconduct against adult seminarians have been reported, and on July 28, Pope Francis took the highly unusual step of accepting McCarrick’s resignation from the College of Cardinals.
Meanwhile, both the unidentified altar boy’s case and that of Grein’s have been under review by the Congregation for the Doctrine of the Faith (CDF), the Vatican body responsible for handling clergy sex abuse claims.

While many observers have eagerly been awaiting the review of the two cases to see if they result in the eventual laicization of McCarrick, Crux has confirmed that a third case is currently being investigated, also from the Archdiocese of New York.
The individual in question, who at this time has chosen to remain anonymous, first reported his case less than three months ago. He is said to be in his forties and the alleged abuse by McCarrick took place when he was a minor.
While specific details of the alleged abuse are unknown, the individual was known to McCarrick through close family friends, as was Grein.

To date, no criminal or civil charges against the archbishop have been filed.
In response to a request for comment, Joseph Zwilling, director of communications for the archdiocese of New York, told Crux that “The Holy See has requested each of the dioceses where McCarrick served to do a review of his time in each diocese. Judge Jones has been asked to lead that review for the Archdiocese of New York. Any other matters concerning Archbishop McCarrick are being handled by the Holy See.”

Barbara Jones is a former federal court judge tapped by Cardinal Timothy Dolan to oversee the review of all sex abuse cases in New York and related policies and procedures.

A CDF official confirmed to Crux that a third case against McCarrick is under review and the general timeline of events but would not comment further.

As Crux previously reported in September, the four dioceses in which McCarrick served - New York; Metuchen, New Jersey; Newark; and Washington, D.C. - are all launching independent diocesan investigations into McCarrick’s history of abuse after Francis declined a request from the United States Conference of Catholic Bishops (USCCB) for a Vatican led investigation into the matter.

In addition to the independent diocesan investigations, the Holy See announced on October 6, 2018 that Francis has ordered a “thorough study of the entire documentation present in the archives of the dicasteries and offices of the Holy See” in order to ascertain “all the relevant facts, to place them in their historical context and to evaluate them objectively.”
To date, the Holy See has not issued a report of its findings from its investigation.

On December 28, 2018, the Associated Press reported that Grein had testified before the judicial vicar for the Archdiocese of New York at the request of the CDF for their ongoing investigation into McCarrick. According to Grein’s civil attorney Patrick Noaker, McCarrick’s abuse included sexual misconduct in the confessional.

Barry Coburn, an attorney representing McCarrick in his civil cases, declined a request from Crux for comment.
Vatican observers have noted that Grein’s case against McCarrick is, canonically, much stronger, as the original allegations by the altar boy against him took place when the individual was 16 years old and, under the Church’s Code of Canon Law, would not have been considered a minor at the time.
The former cardinal, who is now 88 years old, is living at a Kansas religious residence.
Two sources have confirmed to Crux that the CDF will meet in mid-January to review all cases against McCarrick with a potential disposition by the end of the month.

IN MY OPINION by CM

Why won't Cardinal Theodore E. McCarrick come clean and make a complete and total confession and spare dragging this thing out? Save the investigators and the families less time and pain. For one who has heard many confessions need to make a confession, not to another priest, but law enforcement. Bill Cosby, same crime and same general age, as the Cardinal is doing time in jail for his crimes. Should McCarrick and other guilty priests be given a pass for past sexual sins and crimes?

If I had the ear of the Pope, I would suggest, he form a truth and reconciliation-committee similar to South Africa after apartheid un the Late Nelson Mandela. The truth will get out sooner and completely; the Roman Catholic Church (RCC) regains some degree of trust, and the families can begin to heal. Based on law-enforcement some people may be required to do jail time and the RCC pay damages. I not laying all the details, but something has to be done.

Why the update? Do I have some personal animus against the RCC? The short answer, NO! The public is in danger! Too many victims are living in shame, jail, confusion and sexual addiction because of what Cardinal Theodore E. McCarrick and others have done to the most vulnerable and innocents in society around the world. On the other hand, priests are living with this shame and sin; while many priests are carrying this unaddressed crime to their graves. Is there "absolution" for them? The sad truth is the volume of sexual crimes, vast payout, cover-ups, and the unidentified current pedophilia priests serving as we speak are so deep and wide. The above points demand immediate action. Is it any wonder statues of "Mary weeps" (in the midst of Hoaxes and skepticism) in Saint Padre Pio of Pietrelcina in Messina, Sicily, a Madonna statue appeared to weep blood in the town of Civitavecchia in Italy, Our Lady of Akita, Our Lady Guadalupe Catholic Church in Hobbs, New Mexico, etc.? The many people and victims are crying, today, real tears and not a "composition of rose scented olive oil".

I find it ironic that the RCC finds the time, money, interest, and immediacy to investigate "Weeping paintings or icons" for authentication of certainty, but slow and ineffective in identifying and turning over Sexual Predator-Priests within its ranks. Do people still matter in general, particularly, in the RCC? Is there an end in sight? CM